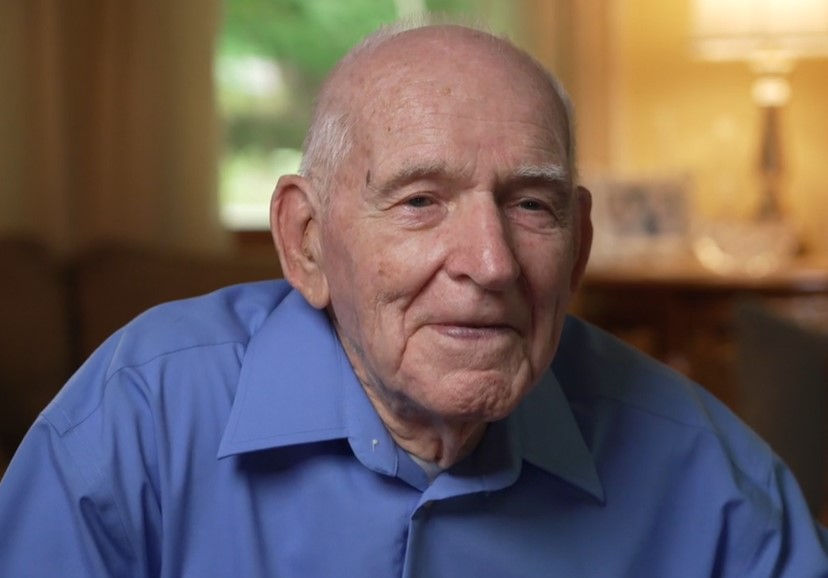 Meet Joe Drake. Born and raised in rural Pennsylvania, this gentle soul has experienced some of the best and the worst that life has to offer. In his 90+ years, Joe has never lost faith in his fellow man. For Joe, life is measured by people, respect and kindness.

Joseph (Joe) Drake was born on October 24, 1924. Joe served as a Sergeant of mortars with Company A 2nd Ranger Battalion during World War II.  He fought in the five major battle areas in Europe: Normandy, Northern France, Central Europe, Rhineland, and the Ardennes including the Battle of the Bulge.

After returning home, Joe worked for 34 years for the U.S. Postal Service in Hawley.  He was appointed Postmaster in 1966.  He served as District Postmaster for 17 offices in Wayne and Pike Counties and served as president of the Wayne Pike Chapter of the Postmaster Association.

Joe married the late Lydora (Dorie) LaTournous on September 23, 1950. They raised two daughters and one son.  Life gifted Joe with many grand and great-grandchildren.

He was active serving as Quartermaster and Treasurer with the Veterans of Foreign Wars (VFW) Post 5823 in Hawley, founded by his late brother Robert J. Drake. Joe worked with the Mayor of Hawley and others to plan parades and carnivals. After the post disbanded in 2008, Joe made arrangements to have the post headquarters on Park Place turned over to the County of Wayne, for the Hawley Senior Center.

Joe also served as chairman of the Hawley Planning Commission for 15 years, board member of Serendipity Child Development Centers, and was a member of the Hawley Fire and Ambulance companies for many years.  He was an usher of St. Philomena/Queen of Peace Catholic Church in Hawley for 50 years and is still a 4th Degree member of the Knights of Columbus.  Joe has always been an active member of the community and a dedicated community servant.